Mickey's Space Adventure is a graphic adventure computer game for a number of computer platforms. It was created by Al Lowe and released by Sierra Entertainment in 1984.
It features the Disney characters Mickey Mouse and Pluto, with an optional cameo by Minnie. It was the first computer game to feature Mickey Mouse, and the first videogame to feature Mickey Mouse beyond LCD Game and Watch games, predating his console debut in Mickey Mousecapade.
While out walking Pluto, Mickey Mouse stumbles upon a spaceship. Investigating the inside, he is briefed by the ship's computer named XL30, who explains that the ship is from the planet Oron in the Alpha Centauri star system.
75 Earth-years ago, an interplanetary thief stole a precious crystal that contains all of their recorded history, which he split into nine pieces and hid throughout Earth's solar system. The thief was caught, but the crystal pieces are still missing, and can only be reassembled in a certain order. XL30 asks Mickey to search the 9 planets (or certain moons of planets) for the pieces of the crystal.
The game consists of a large image with two rows of commands at the bottom. The player selects a verb (such as "go" or "look") from a top row of commands and a noun from the bottom row (such as "east" or "cabinet"). The game focuses on navigation and puzzles, although there is a minor educational element to some of the puzzles (regarding facts about each planet).
Mickey can collect various items, but there is no inventory screen or list; instead, the items are referred to in the command list once they are relevant to a situation.
Mickey begins on Earth where he sees a bright light to the north. He must navigate a small area on Earth, including a road, some hills, his house, and the field where the spaceship has landed. Here he can search his house for tools, or investigate the inside of the ship, by pressing (not pushing; the game will correct the player for trying to "push" a button) the orange and/or blue button in a specific sequence (ranging from 1 to 6 presses, as listed on a map of the solar system inside the ship), then pulling and pushing a throttle to travel between planets.
There is a location on each planet where Mickey can use a scale (from his bathroom) to check his weight, as adjusted by the planet's gravity.
Mickey must figure out which planet to go to based on clues given by the ship's computer, XL30, then don his spacesuit, operate an airlock, and explore the surface of the planet (or in the case of gas giants, one of the planets' moons, because such planets have no solid surface to land on), searching for the 9 crystal pieces (one of which is on Earth). Mickey must complete each planet in a specific order based on XL30's instructions, but the order of the planets varies each time the game is played (with the exception that Uranus is always at the end). Additionally, Mickey and Pluto's spacesuits have a limited air supply that decreases as commands are entered. Three warnings are given as the air supply decreases; after 50 commands without returning the ship, their suits will run out of air and they become too tired to continue exploring.
The game is won by collecting all 9 crystals and returning them to XL30. An alternate ending can occur based on whether Mickey sent a letter to Minnie, which determines whether or not Minnie will appear in the ending.

Developed by:
Walt Disney Computer Software, Inc.
Walt Disney Computer Software, Inc. was established in 1988 as a subsidiary of Walt Disney Consumer Products, a division of The Walt Disney Company. Headed by Shelley Miles, it became the first Walt Disney entity to focus exclusively on the internal development and publishing of computer and video games. The operation was shut down in 1996 and reorganized as Disney Interactive. The company was an early pioneer in the video gaming industry, porting many games from arcade to home console systems, and developing its own games as well. Two of Sculptured Software's first in-house games were Ninja and Street Surfer.
Multiplayer:
No Multiplayer
Platform: 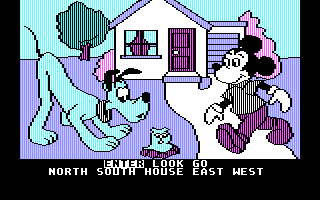 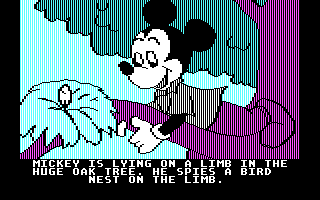 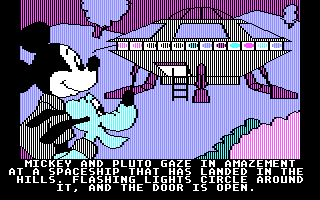 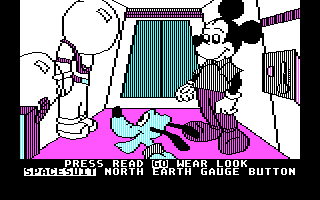 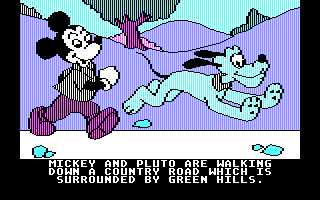 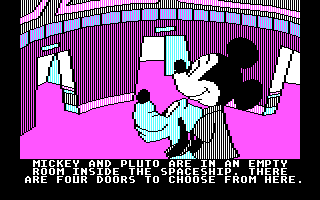 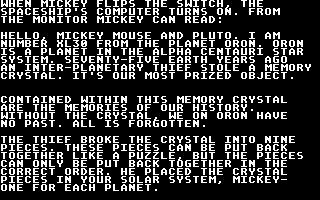 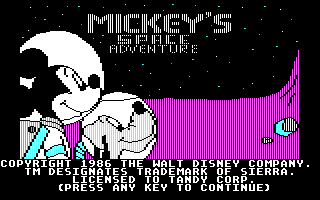 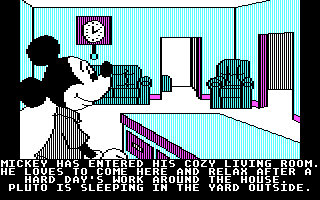 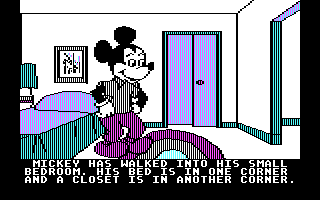