The first 3D flight simulation game to offer a head to head flight simulation against another player through modem. SIERRA'S 3-D HELICOPTER SIMULATOR developed by Sierra On line Inc on DOS format was released in 1987.
The 16 bit colour graphics make the sceneries vivid and the objects detailed. The game offers real flight simulation and was a sensation during the 90s.
The basic concept of the game is to fly and control a helicopter - the McDonnell/Douglas's powerful "Apache". The manuals on how to fly it, its limits and restraints, and how to handle emergency situations are a part of the package.
The game offers three modes : Flight, Target practice, Combat against the computer or  another live player with the help of external application.
The download and installation is free of hiccups. The main menu offeres various locations to choose from: Yosemite Aiport, Los Angles, Fort Worth, Port City, Seattle or farmlands. The player also have the option of choosing a Sierra Helicopter instead of the Apache.
The game offered unique flight simulation. That was not available in any other flight simulation game of that period. One can take off vertically, fly sideways and backwards or can hover midair. The player can make tricky landings with a bit of practice.
The vivid colours and the detailed objects made the simulation real. The moving radars of the air control room, the rising and lowering of the drawbridge and the views of the cities are detailed.
The control options enables the player to have a complete view of the surroundings, or a player can watch himself flying, from outside the helicopter from the base or satellite. The zoom controls offers extreme close ups.
SIERRA'S 3-D HELICOPTER SIMULATOR, created history by being the first to offer head to head combat with another live player through external application. It was also the first to  use 16 bit colour graphics. The game is still popular and enjoyable.
Developed by:
Sierra Entertainment, Inc.
Sierra Entertainment, Inc. also knows as Sierra Online was a major developer and publisher in 80s and 90s producing many known and popular titles like Space Quest or King's Quest . The company was originally established in 1979 in California and after two successful decades was acquired by Activision.
Multiplayer:
No Multiplayer
Platform: 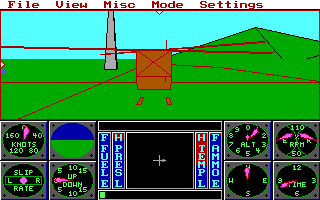 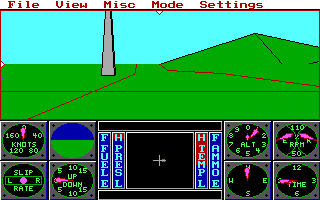 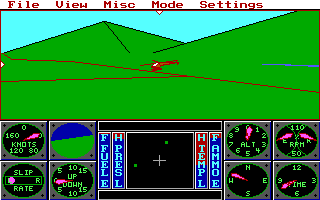 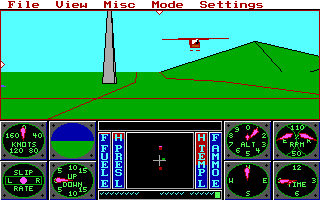 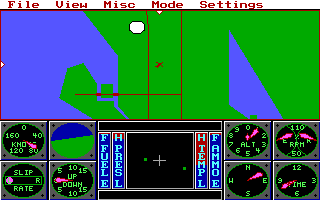