Want to feel being a God? Well here is a game that gives you the feeling of the Almighty with all is powers. No demons to fight with. You need to get into a competition with your fellow Gods to prove who stands as the best. In the year 1989, Bullfrog developed this game and call it Populous. This game got immense popularity. This was the first time that a company thought of crafting a ‘God’ game. Peter Molyneux served as the designer along with Bullfrog furnishing a preliminary version of the gameplay. It is a board game design from the pieces of Lego. Though initially, it aims for Amiga but later the game was available for many platforms. Back to the game, the play gives a tabletop view of the whole conflict. You need to be the God but not so easily, at least for you and your followers. To be the Almighty, you need to be the owner of 25 planets, defeating every tribe. No wonder the ultimate battle is an interesting one with lots of spells and weapons to play with. By now you have the power to build ineffable urban areas and loose tornadoes and volcanoes. You can render shape to planets as per your wish. The series’ third part makes you pass through the more difficult quest, conquering the 25 planets and arise as God. You need to have control over your followers which takes you to another level. Ordering singular or a group, you can excel in task assigned. If you have not played Populous in the past then try it. This 3D game contains innovation and amaze. Ratings and reviews were positive toward this game which makes it worthy of giving it a try.
Developed by:
Bullfrog
Bullfrog was a revolutionary company on a field of gaming. It was established in 1987 by Les Edgar and Peter Molyneux with the goal to produce new games which are more complex and challenging and introduce new gaming mechanics. They were successful and produced many famous titles like Theme Park or Syndicate. The company joined the Electronic Arts empire in 1995.
Multiplayer:
No Multiplayer
Platform: 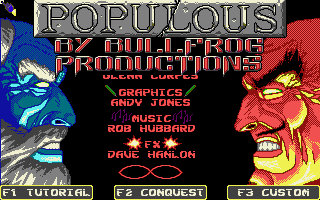 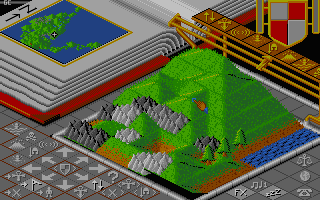 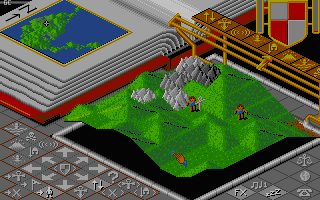