It's trials time and you take the role of an ace roughtrack rider. Competing against real or computer-driven opponents on a series of tricky and dangerous courses, can you constantly achieve the best time and walk away with the prize money?
The action takes place in the mountains - on the roughest, meanest slopes imaginable, and features courses made up of hazards that will test the brains, courage and biking knowledge of the most experienced trials rider.
You are the best in your league - can you keep that position?
Steer your machine around treacherous obstacles including pools of water, abandoned vehicles, slippery poles and strategically placed jumps, but take care - just as in real life, damage to your bike affects its performance. Repairs cost money... when you've won a contest, the last thing you want to do is spend the prize money on is a new set of shock absorbers.
The stages of the knockout contest are raced on a downhill mountain slope, littered with potential hazards. To proceed to the next stage, the course has to be completed within the time limit. That in itself is a challenge, but you also need to earn enough points to qualify - in the knockout league, the rider who comes last in each race is automatically disqualified... Judge your approach to the hazards correctly, and collect points for negotiating them successfully. Each hazard needs to be tackled in the right way if success is to be yours. Slippery poles, for instance, need to be approached carefully, with the bike well-balanced; jumps, on the other hand need to be taken at the right speed if the landing is to be safe. Make a mistake and you are thrown off your bike; vital time is wasted as you recover and remount, and the bike gets damaged in a fall.
Falls and crashes affect your machine's handling. As the race progresses, the bike's condition is displayed on-screen: it starts out as a bright, shiny machine but in the hands of an incompetent rider it can soon end up as a battered, incomplete heap of scrap. Damage is progressive - as you sustain more and more knocks, beginning with scratches and dents, the mechanical condition deteriorates until parts start to fall off.
Developed by:
Binary Design
Binary Design was a development team in the 1980s. IIt was founded by Andrew Hieke, after he previously established Terminal Software.
Multiplayer:
No Multiplayer
Platform: 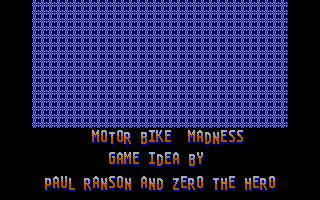 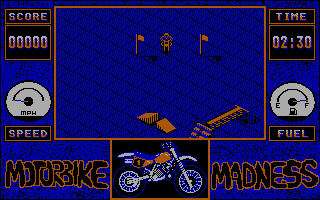 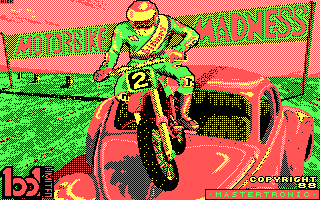 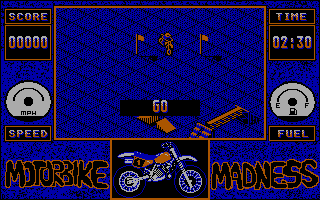 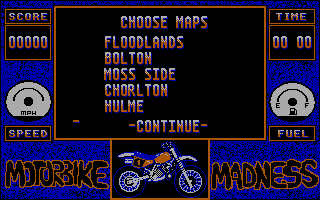