Millennium 2.2 is a resource management game, with an action screen and simple 3D mini-game for base defence. It begins in the year 2200, after a 20 trillion ton asteroid has collided with Earth, rendering it uninhabitable. The player starts in a base on the Moon, with a hostile race of Martians operating from Mars. The objectives are to build up the base on the Moon, mine asteroids and establish new colonies, defend the colonies from Martian attacks, go to Mars and defeat the Martians, and ultimately terraform the Earth and reinhabit it. The objectives are generally completed by researching news items, mining the resources needed for them, and producing them. Millennium 2.2 has a sequel, Deuteros.
The game is controlled with the mouse. The top of the screen shows the current location, the current option under the mouse if any, a toolbar, and the current time and date. The toolbar buttons are: 1. Moon Base - go to the Moon base
2. Colonies - select a colony to go to
3. Craft roster - view the current location of each spacecraft by hovering the mouse over it, and go to the cockpit screen of the craft by clicking on the name. Green indicates docked at a colony, yellow is in orbit around a moon or planet, and red means in transit or otherwise busy
4. Database - view information about moons and planets. Red indicates yet to be visited by a probe, yellow is yet to be researched, green is research completed, and white means a colony is established there
5. Bulletin Board - shows the last eight announcements, new notifications open this screen automatically
6. File access - load / save a game
7. Log - This shows summary information including number of colonies and total population. The C.T.R. percentage - Civilisation and Technology Rating - is the game score, based on: craft in service, number of colonies, and total population.
8. Zoom out - this successively zooms out the display from colony to moon or plant, planetary system, inner solar system if applicable, then outer solar system
9. Advance hour - this advances the game by one hour, and can be held down continuously (for example until the next Bulletin Board notification)
10. Advance day - same as Advance hour but advances the game time by a day
The Moon Base display shows the base with seven different nodes, clicking on a node changes the display to that area of the base. Within a node, clicking on empty space away from any options returns the display to the base overview. Additional colonies have five nodes, the same as the Moon, minus Research and Production - new items can only be researched and produced on the Moon. At the bottom of a colony display are status indicators for each node except Flight Bays, red generally means the node needs attention (resource mining not running, energy output too low etc)
Developed by:
Software Studios
Software Studios was the development division of Electric Dreams.
Multiplayer:
No Multiplayer
Platform: 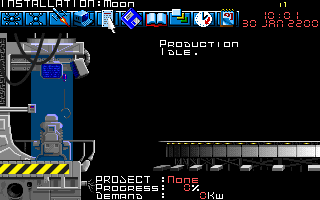 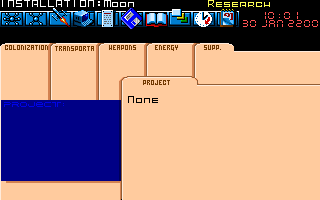 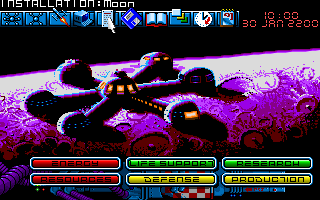 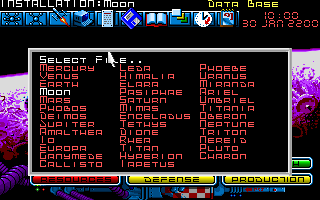 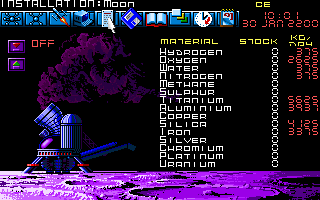 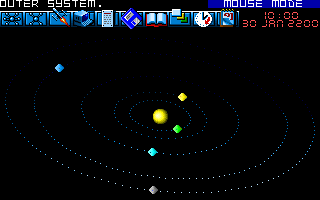 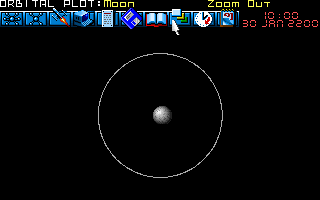 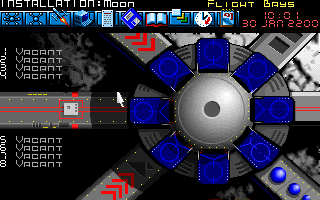 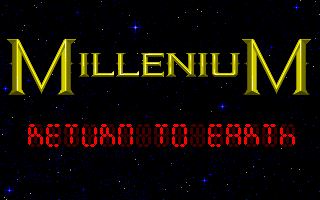 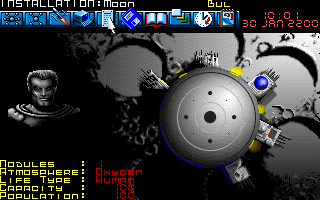 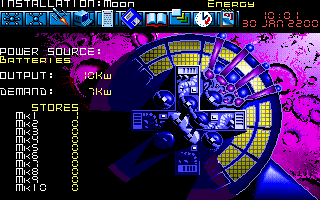