The object of COMBINATION LOCK is to earn the most money in two Matches, rob the COMBINATION LOCK Vault and make a safe getaway. A COMBINATION LOCK Match consists of two Rounds: the Number Seeker and the Combination Cracker.
Round 1: The Number Seeker gameboard consists of 9 boxes, each numbered from 1 to 99. Before selecting a number, players are asked a randomly selected trivia question, with three possible answers. To answer a question, the first player uses the function keys: [F1] for answer 1, [F2] for answer 2 and [F3] for answer 3. The second player, if there is one, uses the numeric keypad: [1] for answer 1, [2] for answer 2 and [3] for answer 3.
The first player to select the correct answer gets to choose one of the numbers on the Number Seeker gameboard. (If the first player to answer the question is incorrect, then the second player may answer the question. If both players are incorrect then another question appears.) The first available number is highlighted. The player may highlight another number by pressing the arrow keys. To select a number, press [ENTER] and the box will display "OPEN," "LOCKED," "CASH" or the "BURGLAR."
If the box reveals "LOCKED," the player receives no money and play continues.
If the box reveals "OPEN," the player has found one of the three numbers in the combination of the COMBINATION LOCK vault. The player receives $100 in Match 1 and $150 in Match 2.
If the box is hiding the "CASH," the player receives $200 in Match 1 and $400 in Match 2.
If the chosen box reveals the "BURGLAR," the player loses $200 in Match 1 and $400 in Match 2. If the player does not have that much money, all of the player's money is lost.
Once all three numbers in the combination have been found, Round 1 is over.
Round 2: The Combination Cracker gameboard consists of 6 boxes containing every possible combination of the numbers revealed in Round 1. The player(s) must answer trivia questions, using the same controls as in Round 1, to earn the chance to try a combination.
Use the arrow keys to select a combination and press [ENTER]. The COMBINATION LOCK safe will turn to each number of the selected combination. If the safe does not open, a buzzer sounds and a new question is asked. If the safe opens, the player earns $400 in Match 1 and $600 in Match 2.
Bonus Round: The player with the most money at the end of the two Matches enters the COMBINATION LOCK Vault. The Vault gameboard consists of 15 boxes numbered between 1 and 99. To select a number, highlight it with the arrow keys and press [ENTER]. The selected box will reveal a cash reward or one of two BURGLARs.
The player may continue to select numbers as long as there is cash behind them. After each turn, the player is given the chance to make a "getaway." The player may press [Y], in which case all the money earned in the Vault is kept and the game is over, or press [N] to continue selecting numbers. If the player reveals a BURGLAR, however, all of the money won in the Bonus Round is lost and the game is over. If the player uncovers all 13 of the cash prize boxes on the gameboard, all the money is kept and the game is over.
The ten top players of COMBINATION LOCK are shown in the "MOST WANTED LIST" displayed at the end of each game. If you have made the list, type in your name and press [ENTER]. To erase all the names on the list, press [C].
To play COMBINATION LOCK again, press [Y] when asked "Would you like to play again?" Press [N] to return to DOS.

Developed by:
Villa Crespo Software, Inc.
In 1990, Villa Crespo Software was formed by Dan Sejzer in Highland Park, IL named after the town in which he born in Argentina. Dan was a BASIC programmer who wrote two text games “Dr. Thorp’s Blackjack” and “Real Poker” which sold around 50,000 copies each. The distribution pipeline and finances from his friend and new partner, Skip Wood brought Villa Crespo Software into the limelight of computer game publishing. Dan Sejzer is a gambling industry expert at blackjack, poker, craps and roulette.
Multiplayer:
No Multiplayer
Platform: 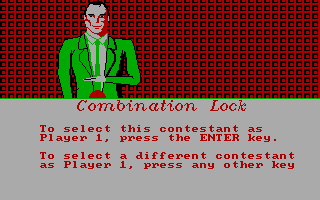 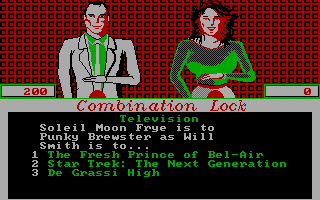 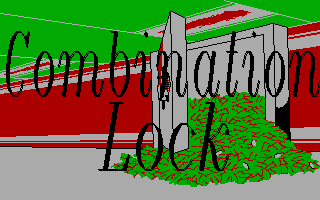 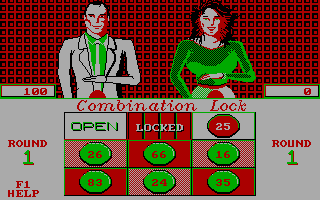 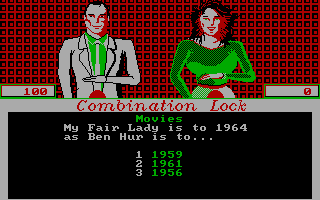