The battleship bismarck was the pride of the new German Navy. The Bismarck, which was launched on 14 February 1939, had a full load displacement of over 50,000 tons and was nearly 830 feet long. Her main battery consisted of eight 38cm guns mounted in four turrets. Each of these guns could fire a shell weighing over 1800 pounds nearly 20 miles. The Bismarck's power plant generated 150,000 horsepower which provided a top speed of 30 knots. Her vitals were protected with up to 14 inches of specially processed steel. Her first and only captain was Ernst Lindermann.
The Bismarck's primary role was one of a commercial raider. She was designed for long endurance cruises in the Atlantic. The Bismarck had her first and only chance in late May, 1941. Under overall command of Fleet Admiral Gunther Lutjens, she set sail for the North Atlantic with the newly commissioned heavy cruiser Prinz Eugen. The British were well aware of Lutjens' plans through the interception of coded messages. Initially, they sent bombers to destroy her off the Norwegian coast. However, due to inclement weather she escaped into the North Atlantic. The Bismarck was rediscovered by two British heavy cruisers which led to the classic confrontation between the HMS Hood and HMS Prince of Wales and the German task force. After destroying the Hood and chasing away the Prince of Wales, the Bismarck steered a course for France in order to repair her damage. Ultimately, she was intercepted and sunk by British forces under command of Admiral Sir John Tovey on May 27, 1941.
This game simulates the breakout and pursuit of the German Battleship Bismarck that occurred during the early stages of World War II. The computer performs most of the tedious calculations and exhibits the results on the screen. Play balance and variability are assured through the random placement of forces. The use of the computer permits truly "blind" play.
The game provides for both solitaire and two player action. In the Apple ][ solitaire version, you are the admiral in command of the German forces and the computer moves the British forces. In the IBM solitaire version, you must indicate which side you wish to control. The German player always moves first.
Developed by:
General Quarters Software
Multiplayer:
No Multiplayer
Platform: 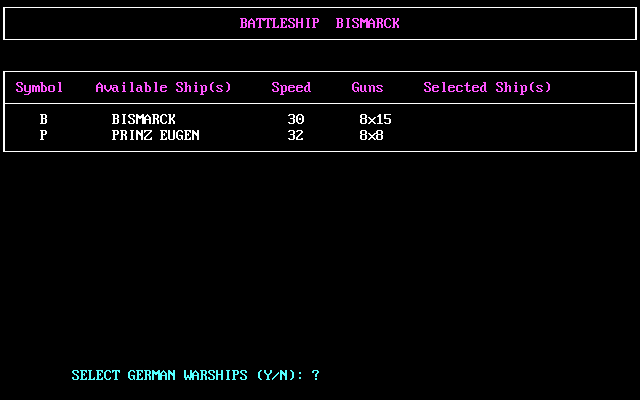 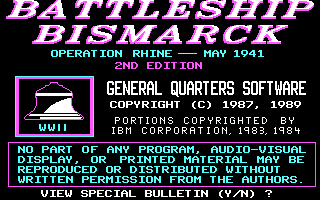 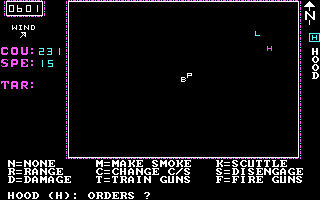 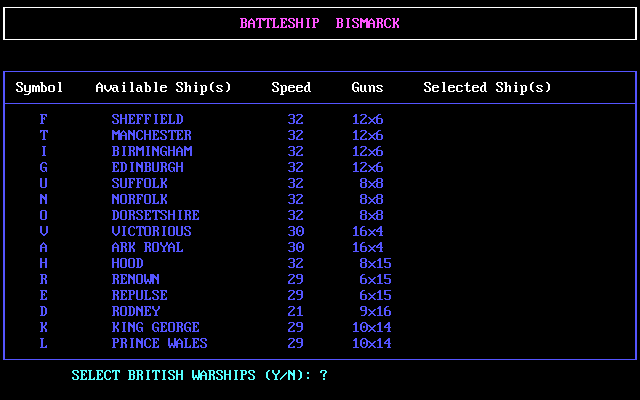