Battle Chess is a computer video game, which is similar to the actual chess. An interesting feature of the game is that the pieces of chess become alive and fight with each other. The game can be played solo against the computer and also, it can be played with a friend in opposition. The player can play with his friend with the help of some local area network, hot seat or via a modem. The rules of the classic game of chess and Battle chess are the same. The pieces on the checkerboard fight against each other and captivate each other. The game consists of 6 different kinds of pieces of each tint. Moreover, the king is not able to captivate the king of the opposition party. Furthermore, there are 35 fights, which are animated. For instance, the rook transforms into a monster of rock and murders a pawn by smashing him. Along with this, the game consists of some famous reverences, which are a part of their culture. The game can be enjoyed in two dimensions also. The two-dimensional game does not contain any animations. However, there are several voice clips, which are played in the two-dimensional game. It describes the moves of the pieces on the checkerboard and also, guides the beginners. If you are interested in the game of chess, then this game is definitely going to take your interest to a completely new level. The animations of the game, the pieces fighting with each other will keep you engrossed in the game throughout. In addition, the sound part of the same keeps the excitement intact throughout the game. The game consists of VGA graphics and the sound is played using a CD-ROM.
Developed by:
Interplay
The company was founded by Brian Fargo in 1983. Stationed in Southern California, the company created marvelous titles like Fallout or Baldur's Gate. Even over the former success, the company eventually went bankrupt in 2004 and sold most of their intellectual property to other companies like Bethesda.
Multiplayer:
No Multiplayer
Platform: 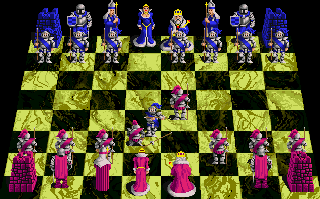