The Annals of rome is a vast strategy game based on the rise and fall of the Roman Empire. Starting in the year 273 B.C., the date by which the Roman Republic had gained control of Italy, your role is that of the ruling power group in the Roman Senate, deploying Roman armies and commanders in successive foreign and civil wars.
YOUR PRIME OBJECTIVE IS...SURVIVAL.
At any time you will be faced with up to THIRTEEN independent hostile powers, each fighting to extend its own range from the incompetent GAULS to the deadly CARTHAGINIANS, and many more. If you survive the initial centuries of the game and establish an empire, be prepared...
Beyond your northern frontiers on the RHINE and DANUBE are the teeming hordes of barbarians, including ALLEMANI, MARCOMANNI, FRANKS, GOTHS, DACIANS, HUNS, VANDALS, and more. In the south, your eastern frontier on the EUPHRATES is constantly disputed by the PARTHIAN EMPIRE and later by the PERSIAN (SASSANID) EMPIRE.
To give you a military advantage, you have at your disposal the incomparable Roman Citizen LEGIONARIES, reinforced by mobile AUXILIARIES and static Garrison troops (LIMITANEI). In addition, you have up to 21 individual OFFICERS, of a wide range of ability and loyalty. If you deploy them and your armies intelligently you will usually beat the opposition. But beware... The cost of military failure is invasion and loss of territory, with consequent loss of popularity and confidence in your regime. If this becomes too serious some of your COMMANDERS may decide to rebel and attempt to seize power in Rome as DICTATOR, or even reach for the purple and become EMPEROR. This means CIVIL WAR, the consequences of which may be a disastrous weakening of the armed forces and withdrawal of legions from critical frontier regions.
NOTE: History rarely gives second chances. The only skill level in this game is ALL OR NOTHING.
The game may continue indefinitely, or until it is obvious that the Empire has utterly collapsed and no more can be gained by going on.
The game is played as a sequence of GAME-TURNS, each GAME-TURN representing between one and 25 historical years. The actual dates corresponding to a given GAME-TURN are displayed in the top right-hand corner during most phases of the game. The random variation in GAME- TURN length reflects the essential unpredictability of historical events. For instance, several long periods of relative stability may be suddenly followed by a few short periods with a rapid alternation of fortune.
Developed by:
Rome Software
Multiplayer:
No Multiplayer
Platform: 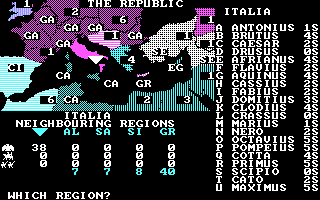 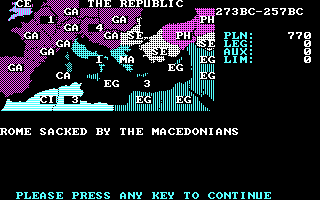 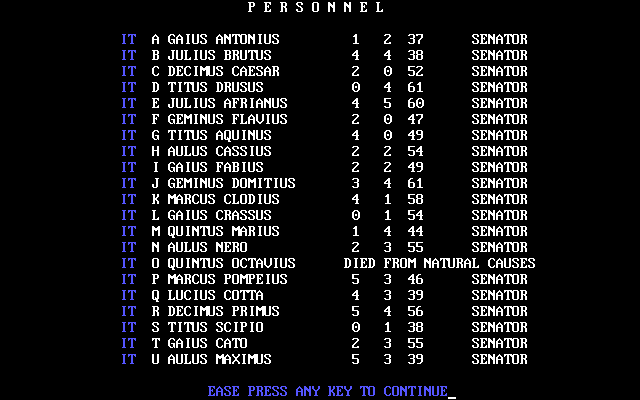 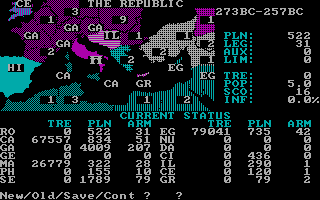